TO THE BEAT! BACK 2 SCHOOL!
Actress Jillian Clare directed the first film, To The Beat!, now streaming on multiple platforms and is back directing the sequel (one of only a handful of female directors that have directed the first and the sequel in a film series).
This film has a huge social media following with their teen stars and influencers including popular stars HAYDEN SUMMERALL AND JAYDEN BARTELS.


In the highly anticipated sequel, the popular teen cast goes back to their performing arts school following spring break to compete for an all-expense paid summer scholarship program to a prestigious conservatory of fine arts. Friendships and feuds continue as sisterhood is tested, new bonds are formed, and rivalries heat up leading to a drama-filled evening at the epic 80’s Spring Fling where a major scheme shuts down the party and jeopardizes the upcoming end-of-year showcase.


Director Jillian Clare shares, “I’m honored and so excited to be one of very few women who have directed both the original and sequel in a film series. I’ve been able to grow so much as a director with these films and they hold a special place in my heart. Fans have patiently waited for this sequel and they won’t be disappointed.”


To The Beat! Back 2 School will be available on cable providers including Dish, DirecTV, Comcast, Spectrum, Charter, Cox, Verizon Fios, Frontier, Suddenlink, Mediacom, Century, and on VOD platforms including: iTunes, GooglePlay, Amazon Instant, Vudu, FandangoNow, Xbox, Vimeo, Hoopla, and OverDrive. DVD will be available online at all major retailers.
A Mermaid for Christmas

"Filled with warmth, humor, whimsy, and just a touch of magic, A MERMAID FOR CHRISTMAS combines classic Christmas themes with an escapist fantasy element that only a mermaid can provide."

Award-winning digital gay sitcom Old Dogs & New Tricks has joined the ever-growing library of independent LGBTQ productions on the premiere streaming service Prime Video. All four seasons are now available to stream and purchase in the US and UK on Prime Video’s TV platform and at www.amazon.com/v/odnttheseries.

The show received “Outstanding Dramedy Production” and “Outstanding Ensemble Cast” honors from LA Web Fest, and was an Official Selection of LA’s Hollyweb Festival during  each of its four seasons.  Its first two seasons were previously released on DVD by Wolfe Video.

Soap Opera Digest described the show as “Sex and the City meets Queer as Folk” while Frontiers magazine included it on their list of “Ten Web Series You Should Be Watching.”    “I’m thrilled the show is now available to Prime Video viewers,” says Acord.  “More than the other major platforms, Prime seems truly committed to reaching out to independent productions and providing them a wider audience.  I’m so happy new viewers will now find the show, and that our hearing-impaired fans can finally see the show with subtitles!”
PRIDE the series
PRIDE: THE SERIES ADDS NEW COLOR TO PRODUCTION PALLETTE

New York, NY – Today, the thought-provoking digital series PRIDE: THE SERIES, is pleased to announce its recent hire of Scott C. Sickles and Maryam Myika Day, who will join the PRIDE team as head writer and breakdown writer, respectively.

Sickles, an LBGT writer of Asian descent, comes to PRIDE: THE SERIES with thirty-plus years of experience in the writing field. He has received four consecutive Writers Guild of America Awards on the writing team of the daytime serial General Hospital, as well as six Emmy Award nominations for that series and One Life to Live. Sickles’ play Nonsense and Beauty receives its world premiere at the Repertory Theatre of St. Louis in March.

Sickles had this to say, “I was especially intrigued by how the first season centered around Pride Day 2013, then went back and forth in time, telling the story of these characters’ lives like a neo noir puzzle. Likewise, the new season revolves around World Pride Day 2019. Six years later, the characters have grown up, their relationships have evolved, and the world has changed... in good ways and bad. We’re looking forward to more romance and sex for these characters, as well as more politically-charged stories that reflect the challenges LGBT people and our allies face in these troubling times.”

Day, a Telly Award winning producer, hails from New York City where she began her career studying with some of the greats in acting: the late Israel Hicks and currently master teacher, Ivana Chubbuck. She most recently appeared in a supporting role in the feature film SMARTASS, starring Joey King of FX’s Fargo, her writing efforts landed her a partnership with MarVista Entertainment for her TV movie ON THE LINE the story of the first African American Radio City Music Hall Rockette and penned the untold story of Tammi Terrell for the upcoming biopic MOUNTAIN HIGH, starring Kat Graham of Vampire Diaries and All Eyez On Me.

Day went on to say, “Our passion is to reflect through our art the times we are in. PRIDE: The Series is a reflection of the unique timing of the absolute freedom of voice, agency and action we now see in the LGBTQ community. PRIDE the series is a reminder to us all of our responsibility to show up, be present, and exact who we are and to continue to fight to let our voices be free.”

Along with the new writers, PRIDE: THE SERIES is planning on introducing new, engaging storylines with fresh, seductive characters this upcoming season. Returning PRIDE: THE SERIES cast members include Emmy-nominated Ilene Kristen (“One Life to Live”), award winning actress Lauren B. Martin (“As the World Turns”), Tony Head (HBO’s “The Wire”), two-time Emmy winning Vincent De Paul (“As the World Turns”), and three-time Emmy nominated actress and one the most successful voice artists working today, Melissa Disney.
Watch Andrea Evans' new documentary for FREE on Amazon called "Rocking the Couch" based on the #MeToo movement!
​(click the button below to go to Amazon to watch the full documentary)
Watch Rocking the Couch on Amazon
LADIES OF THE LAKE: RETURN TO AVALON
Premieres with ALL NEW episodes June 19th 2018 on Amazon and Amazon Prime Video!
(Trailer below)ER 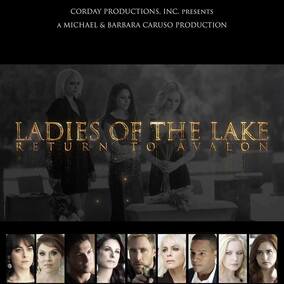 ​After Forever  - A story about love, loss, and new beginnings.

​KEVIN SPIRTAS | Co-Creator/Writer In 2008 the 30-year acting veteran, produced the NY Shakespeare Festival reading-presentation of Don Cummings’: A Good Smoke, starring Academy Award winner actress, Meryl Streep, and directed by Tony Award winning director, Pam McKinnon. Shortly following in 2009, Spirtas made his debut as a Broadway producer on the critically acclaimed revival of: Finian’s Rainbow, In 2012 he co-produced the hit Broadway musical: Priscilla…Queen of the Desert. Kevin gives a special thanks to his producing partners, Alan and Barbara Marks for mentoring him and teaching him with grace and style how to put to get a show onto Broadway. And for encouraging him to head west to produce: AFTER FOREVER.

​MICHAEL SLADE | Co-Creator/Writer Playwright, librettist, award-winning children’s author, and Emmy-nominated television writer. His plays, which have been produced in NYC, Los Angeles, on National Tours, and by numerous regional theatres, as well as theatres in Europe, Asia and Australia, have featured such actors as Colleen Dewhurst, Kate Burton, Billy Crudup, Andrew Rannells, Daphne Rubin-Vega and Corbin Bleu. His TV credits include Another World (WGA Award nomination), One Life to Live (Emmy nomination), Days of Our Lives, and Passions. 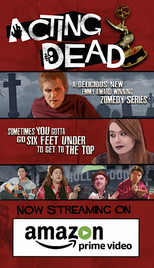 Acting Dead is a satrical dark comedy about the world of Hollywood zombies, and not just the ones leaving their botox appointments in Beverly Hills.  What if your acting career took a turn for the worse and the only way to be cast in the ever growing zombie-based tv shows and movies was to...actually become one?  Welcome to the afterlife of Tate and Alex, both struggling to get by in their new skin, or what's left of it.  But life doesn't slow down just because your heart stopped and sometimes you have to go 6 feet under to get to the top. 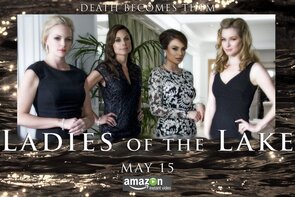 About Ladies of the Lake

Ladies of the Lake is based on the novel by Ken Corday, which centers around the murders surrounding the rich and powerful women of the Avalon gated community. 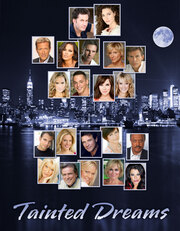 About Tainted Dreams – The Series

Tainted Dreams is a steamy, sexy new dramedy following the lives of the cast and crew of a fictional daily TV soap opera, Painted Dreams. It’s a story about the drama behind the drama. The cast of Tainted Dreams uniquely combines stars from Broadway, reality TV (BRAVO’s The Real Housewives of New Jersey and POP’s IMPACT Wrestling) with traditional soap opera fan favorites from All My Children, One Life to Live, As the World Turns, General Hospital, Guiding Light, The Young and the Restless, The Bold and the Beautiful, Days of Our Lives and more.

Based on the true story of a nurturing, ambitious television producer of a long-running, daily soap who struggles to achieve emotional balance and fulfillment in her own life against a backdrop teeming with behind-the-scenes drama revolving around the egos and antics of actors, crew and network executives.  Tainted Dreams is what happens behind the scenes when the director yells cut, and the cameras stop rolling.

Tainted Dreams is the Grey’s Anatomy which occurs in a soap studio instead of a hospital. It is a scripted ‘dramedy’ that is character driven,  blending comedy and drama seamlessly. It follows the lives of the cast and crew, including the corporate network heads, of the fictional soap Painted Dreams, touching upon many social issues. It is a rare look at the interaction of all principals’ involvement in a realistic manner, while creating compelling dilemmas along the way.
Sonia Blangiardo, creator of Tainted Dreams and  veteran soap opera producer and director, pays  tribute to this iconic genre which has brought entertainment and enjoyment to many for over 80 years on radio, TV and now the Internet by naming the fictional soap opera Painted Dreams.

Painted Dreams was the first daytime radio soap opera program in the United States. It was broadcast from Chicago by radio station WGN. It was created by the legendary soap creator and writer Irna Phillips who created, among others, the Guiding Light on the radio and TV, As the World Turns and Another World. Phillips was a mentor to soap legends Agnes Nixon and Bill Bell.  Painted Dreamspremiered October 20, 1930 and last aired in July, 1943.
Tainted Dreams is differentiated by the blend of a popular, diverse cast, with award winning talent from All My Children, One Life to Live, Guiding Light, General Hospital, The Bold and the Beautiful, Days of our Lives and As the World Turns and main stream stars from reality and theater and musical artists.