THIS WEEK'S ACTOR IN THE SPOTLIGHT
IS
THE BOLD AND THE BEAUTIFUL'S
LAWRENCE SAINT-VICTOR AKA CARTER WALTON!
(click the photo to go to the actor's website or IMDB or twitter or FB) 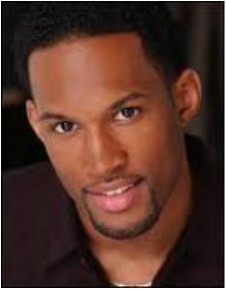 FROM  WIKIPEDIA ABOUT THE CHARACTER CARTER WALTON:
Carter Walton, portrayed by Lawrence Saint-Victor, made his first appearance on January 31, 2013.
Carter Walton came to Los Angeles to visit his adopted brother, Marcus Walton, who had also been adopted by the Forresters. Marcus proudly introduced Carter to his family, especially his wife, Dayzee Leigh. When Marcus bragged about Dayzee's organizational skills, he ran across some mysterious adoption papers. Dayzee admitted she had long ago helped a woman named Maya Avant give up her baby for adoption since Maya was being wrongly jailed for a crime. Now Maya was back and wanted her baby returned, and Dayzee felt she might be in trouble since she had allowed attorneys to handle the adoption and didn't know if money had changed hands. Carter studied the papers and informed Dayzee that Maya had a legal right to know who had adopted her baby.

Carter helped Marcus and Dayzee search for the adoptive family of Maya's daughter, only to find out that they had all died in a car crash. Later, Carter met Marcus' cousin, Rick Forrester. Rick explained that Forrester Creations had been having some problems with patents and counterfeit designs, and Marcus suggested that Rick hire Carter, since that was Carter's area of legal expertise.
​
Carter met Maya and asked her out, not knowing that Maya had been interested in Rick until she found out Rick was hiding his identity as a Forrester. Carter brought Maya to the Forrester mansion for a dinner party and was oblivious when Maya was uncomfortable seeing Rick with his girlfriend, Caroline Spencer. He tries to woo Maya, but she's not interested.

Lawrence Saint-Victor was born on June 14, 1982 in Rockland County, New York, USA. He is an actor and writer, known for Guiding Light (1952), The Bold and the Beautiful (1987) and Pass the Light (2015). He has been married to Shay Flake since September 1, 2007.
Graduated from the Conservatory of Theatre Arts and Film at SUNY Purchase.

PHOTOS BELOW ARE FROM GOOGLE
THE BOLD AND THE BEAUTIFUL, THE FORGIVEN, GUIDING LIGHT, UGLY BETTY,
​LAWRENCE ON A BOOK COVER "TO WHOM MUCH IS GIVEN" (BOOK BY CECILIA T. CAPERS)
(click on "play" (if it doesn't start on its own) on the 1st pic by putting your cursor on it and will start the slideshow)